Skip to content (Press Enter)
HomeUncategorizedHiking Back to Her – The Trek

Leave a Comment on Hiking Back to Her – The Trek

Yep, that cute little girl is me circa summer of 1996. According to my mother, I was adamant about my dislike for “hiking” but excitedly agreed to go “exploring” with her in the Yosemite Valley. Now, almost 26 years later, I’m the same age my mom was when she took this picture of me. Kind of puts it in perspective.

Sorry, let me introduce myself. I’m Jackie, and I’ll be attempting a full thru-hike of the PCT in 2022, headed NOBO starting at the Mexico border on March 2nd. Turns out I grew up to learn that hiking and exploring often go hand in hand.

This is my face now!

As a kid, I was pretty outdoors adjacent. Being raised in SoCal, we took ski trips to Mammoth in the winter and went body-surfing at the beach on the weekends in summer. In kindergarten, my dad signed us up for the YMCA version of the girl-scouts but without cookies and no real learning of any skills, but more of an excuse for dads to hang out with their daughters and other girl-dads. I started playing soccer at six years old, which helped fuel a love for getting outside and pushing my physical and mental abilities.

Can we fast forward a bit?

Sure. That was pretty much my childhood. I found theatre in high school and decided to go to college for that. Got into my first adult relationship, which like most first adult relationships are, was horrible. After almost five years of losing myself in that mess, I finally found the strength to get out. Then I started the long journey back to who I was before.

About eight months later, in May of 2015, I made plans with a girlfriend to go camping in Joshua Tree. I had never been and was getting ready to start a long summer season at the theatre I was working for and this weekend was the last chance I had to get away. My friend ended up not being able to make it but I wasn’t about to let that stop me from going to see some rocks, so I packed up my dad’s tent, Coleman stove, four gallons of water, and set out for the desert. 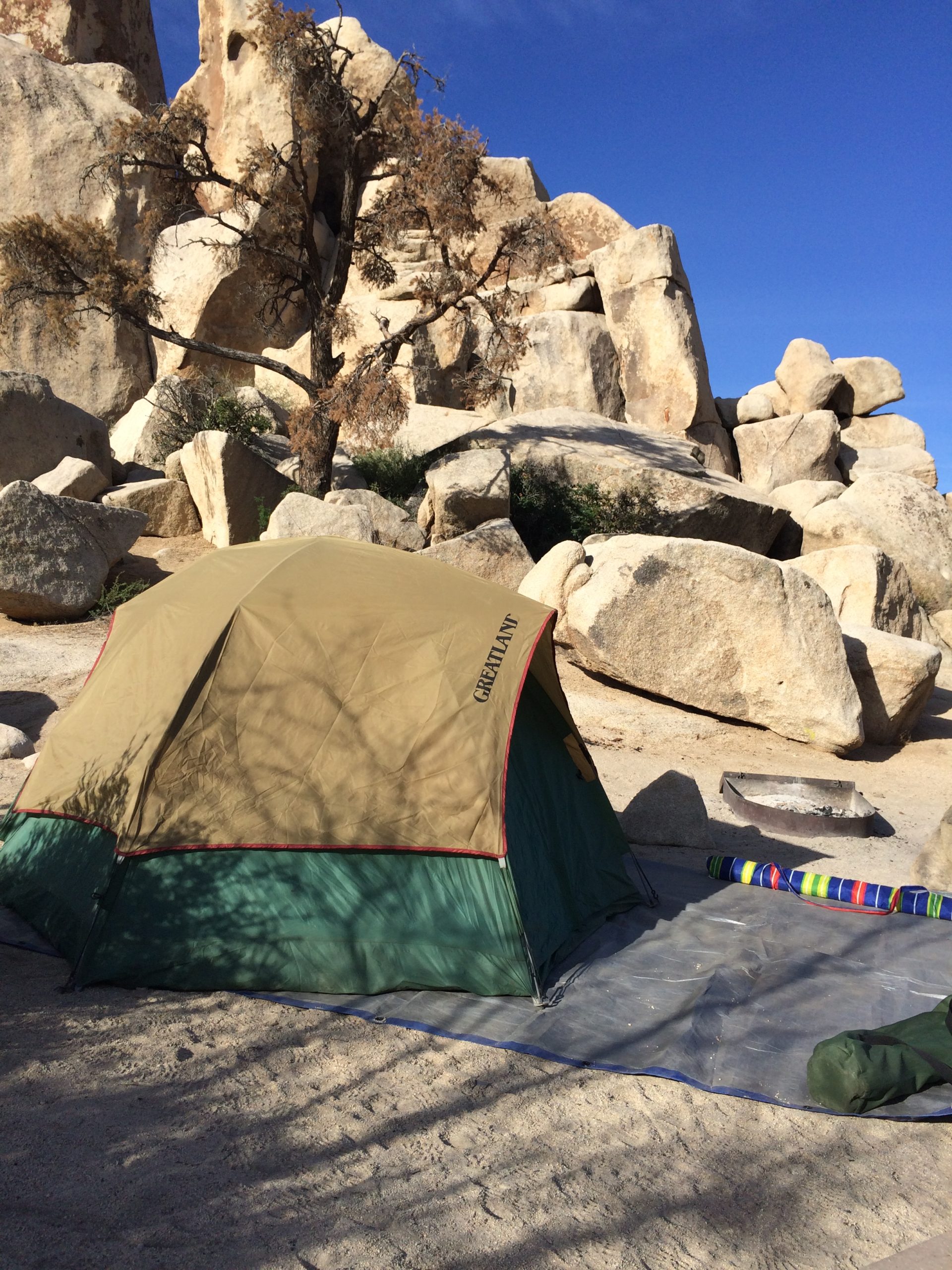 The tent in question.

I pulled into the campground later that evening, and after taking a second loop through, I found the last unclaimed spot which was tucked away from the more obvious markers. It was a lucky start to my first solo adventure. The rest of the trip went off without a hitch. When I told others I was out there on my own I was often initially met with surprise, followed by a series of questions:

Because I enjoy it.

“Wouldn’t you rather go with someone?”

Sure but coordinating schedules can be difficult and finding someone who wants to do the same thing can be challenging. So rather than waiting for someone to do the things I want to do, I’m just gonna do it and find people that are there and into it.

Usually, after interrogation people fall into one of two camps:

A few weeks later I started a new relationship, one with a man who not only humored my outdoor hobbies but championed them. He taught me how to surf and rock climb, took me camping in Baja, and Big Sur, and introduced me to all his friends, now my friends, working in nature conservation. One of whom previously hiked the PCT herself.

The man in question in Baja. Spoiler: he’s now my husband.

Got it. So when did you start trekking?

Fast forward to 2017. I had been working a ton and desperately needed a break but there wasn’t one on the horizon for a few more months. The idea of hiking the John Muir trail had squeezed its way into my brain and stuck there like that annoying “Baby Shark” song.

But I didn’t tell anyone about my “plan.” I casually brought up how I might like to hike it to the boyfriend and he would reply:

“Sure! Maybe next year.”

While I was secretly saying to myself:

“I love you, but you’re not invited, and I’m going in six months.”

I knew that if everything went as planned that I had 12 days in my schedule. I was leaving it to fate, that if it was meant to be then nothing would pop up in that time. My calendar stayed clear. The universe had spoken.

A month out I officially committed. Most of my free time that month was spent at REI. I broke the news to my family, who initially were freaked out and though they still had their concerns, eventually came around. My dad offered to drop me off at the trail and my mom would resupply me at Vermillion Valley Ranch. I would walk the trail solo. Did I mention it was a really big snow year? Something like 200% snow pack and a month behind melt schedule, even in mid-July when I was starting.

Ultimately I wanted a challenge both mentally and physically, that would push me as hard, if not harder than in high school when I was playing soccer four hours a day during the week and had four games on weekends. I also was speaking so much for work that I had injured my voice and I didn’t want to talk to anyone for two weeks and give it time to heal. The idea of seeing just how far my own two feet could take me also made me curious to try.

I left Toulumne Meadows and and made it to the top of Mount Whitney 12 days later, snow and all. I reached my goal and got everything I was searching for and more. It was this seemingly insane-to-some act that inspired my boyfriend to propose to me a few months later. 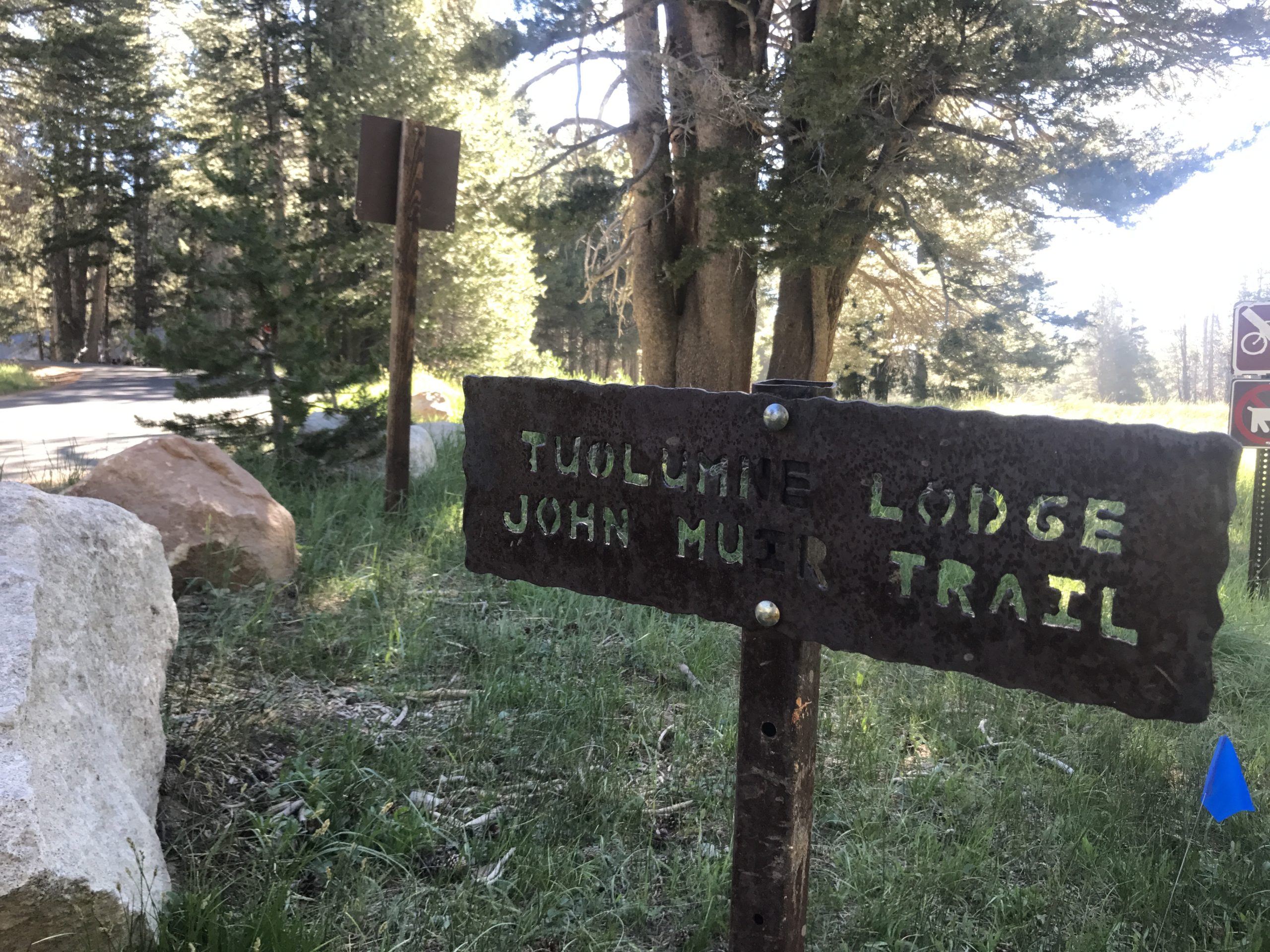 The start of my JMT journey. 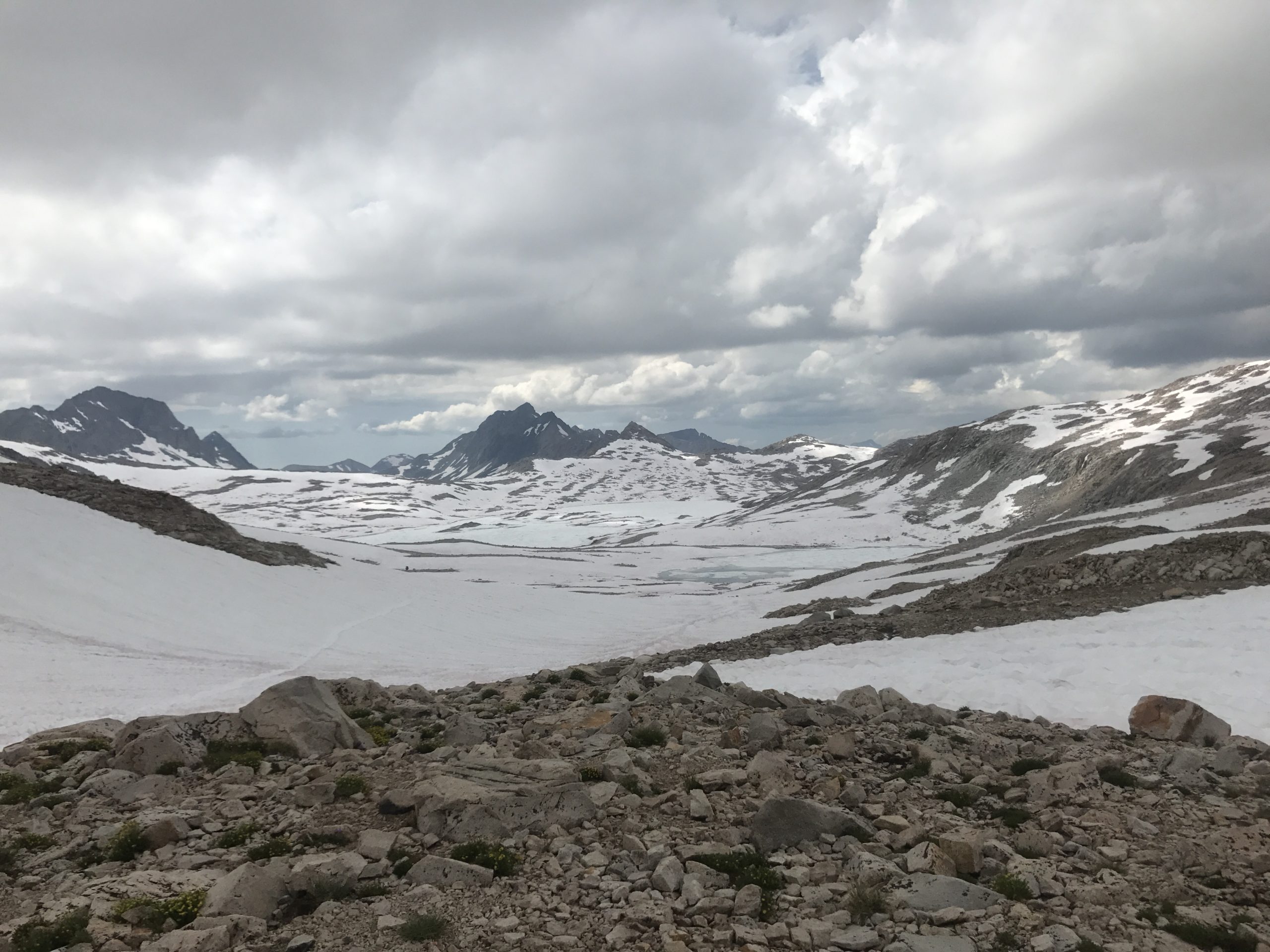 A sample of the five miles of snow going through Muir Pass.

Me on the highest peak in the lower 48.

So why the PCT and why now?

After hiking the JMT and how well it went, I couldn’t help but dream about the PCT. But much like the JMT I mostly kept those thoughts to myself, since when would I ever find the time…Instead I did a few smaller trips, usually with my now-husband, Colin.

Of course, the pandemic happened, and like with many rerouted life as I knew it. Most of the work I had been building upon since graduating college collapsed with no real timeline of when or if it would return. I got a desk job helping at my dad’s shop and some other part-time teaching work at a friend’s music studio, and though I was very grateful to have the work, I was working more, being paid less, and it was not what I was truly passionate about. On top of that, I just had no idea of what I wanted to do next. All I knew was I was depressed and something needed to change.

One day, while I was working at the shop, a couple of family friends came by to say hi to my dad and they brought me a couple of postcards with artist renderings of the John Muir Trail and the Pacific Crest Trail. I hung them up next to my calendar to give me something to daydream about. Sitting inside an office that much had me craving the natural world.

With so many of my go-to hobbies being social endeavors I was not able to refill my very depleted well. At one point I broke out in undiagnosed hives, and at another I had crippling stomach pain that persisted for weeks. The emotional toll was starting to take physical manifestation. I had to look to what I could control: myself. I could still put one foot in front of the other, and the trail was starting to call to me again. I started to plan.

Could I section hike the PCT? Living in Southern California I thought I might be able to piece some trips together, and was able to do a section from the southern border to Julian but life ended up getting in the way and the temps got too hot so I didn’t get any more in besides that in 2021. But many things in my life were shifting and I set my sights on a full attempt in 2022.

My husband’s work, along with the universe at large pushed us out of LA up to central CA where we decided I could take some time off work to have some space to think that I hadn’t had being in survival mode for so long jumping from job to job. We wouldn’t know where we would end up next after his seven-month program ended so I was stuck in this limbo. Not where we were long enough to get a “real” job, not knowing where we’d go next so couldn’t really “plan” anything for “after.” Welcome to the purgatory that is my life the last two years.

I can’t remember when I committed to hiking the PCT. There were monuments. First, I floated the idea by Colin a couple times and he was always supportive. So I committed to myself first, then him, next I waited on a permit, I started to tell others, and every time I spoke about it the more it became real.

Now we’re here. Me, a 31-year-old woman, hiking to Canada from Mexico. But what I’m really doing is taking little five-year-old Jackie exploring. Because the best thing I can do in the present for my future self is to honor and listen to the happy little preschooler inside of me who knew instinctively just what she wanted and needed before the world tried to tell her otherwise. So when others ask if I’m alone out there, I’m really not. 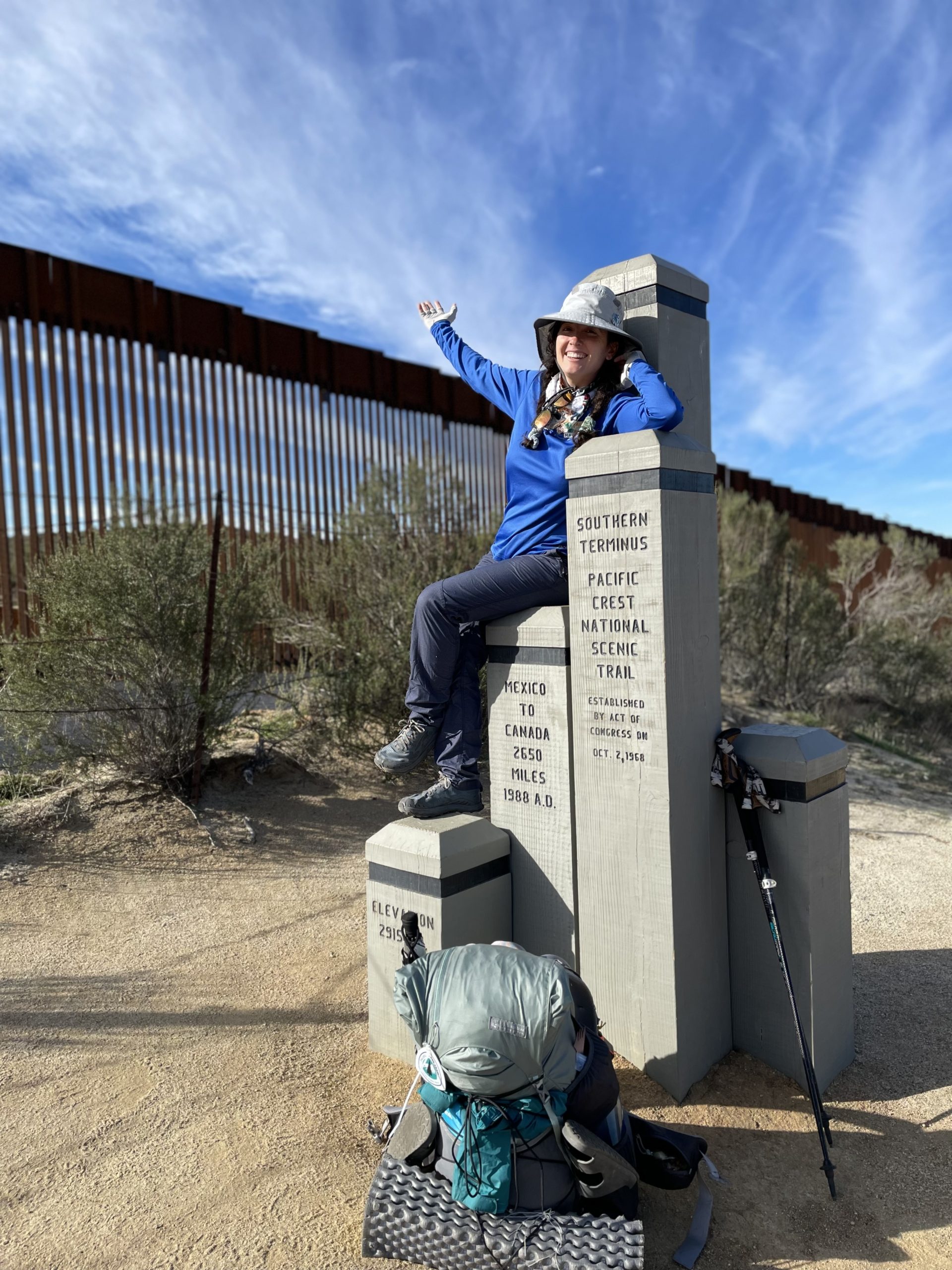